divine. The only possible adjective

The Aeolian Islands or Lipari Islands (Italian: Isole Eolie, pronounced [ˈiːzole eˈɔːlje], Sicilian: Ìsuli Eoli) are a volcanic archipelago in the Tyrrhenian Sea north of Sicily, named after the demigod of the winds Aeolus.[1] The locals residing on the islands are known as Eolians (Italian: Eoliani). The Aeolian Islands are a popular tourist destination in the summer, and attract up to 200,000 visitors annually. The largest island is Lipari. The other islands include Vulcano, Salina, Stromboli, Filicudi, Alicudi, Panarea and Basiluzzo.

The present shape of the Aeolian Islands is the result of volcanic activity over a period of 260,000 years. There are two active volcanoes – Stromboli and Vulcano. The volcanic activity of steaming fumaroles and thermal waters are on most of the islands. Only the one on Stromboli, the northernmost island, is still active. The Aeolian Islands as seen from space. Scientifically the archipelago is defined as a “volcanic arc”. Geology explains the origin of the Aeolian Islands is due to movement of the Earth’s crust as a result of plate tectonics. The African continental shelf is in constant movement towards Europe. The resulting collision has created a volcanic area with ruptures in the Earth’s crust with consequent eruptions of magma. The “Eolian Arc” extends for more than 140 kilometres, but the area of geological instability caused by the collision of Africa and Europe is very much larger. It includes Sicily, Calabria, Campania together with Greece and the Aegean islands. The complex of the eight Aeolian Islands, covering an area of 1,600 square kilometres, originated from a great plain at the bottom of the Tyrrhenian sea. Emissions of lava from depths of up to 3,600 metres resulted in the formation of the Eolian Islands, together with Ustica and a series of submarine volcanoes named Magnani, Vavilov, Marsili and Palinuro, as well as two that are unnamed. Curbing urban development has been a key to preserving the Aeolian islands in a natural state. New buildings are severely restricted. Existing residences can be bought and restored but must be constructed to resemble its whitewashed houses. Traditional houses consist of modular cubes constructed from indigenous building materials — stone, lava, pumice and tufo. Almost all houses have a large outdoor terrace, usually shaded by grape-vines and flowering vines. The houses, balconies and terraces are mostly decorated with brightly patterned terra-cotta tiles, a throwback to long-ago Spanish conquerors.

4000–2500 BC
The first evidence of Sicilian migration was in Lipari (Castellaro Vecchio). A manufacture and commerce of obsidian objects was highly developed until the introduction of metals.

1600–1250 BC
During the Bronze Age, the Aeolians prospered by means of maritime commerce in an area which extended from Mycenae to the British Isles, from where tin was imported. Villages on the Aeolian islands flourished on Capo Graziano (Filicudi), Castello (Lipari), Serro dei Cianfi (Salina), Capo Milazzese (Panarea), and Portella (Salina). All these settlements were destroyed by new Italic invasions in 1250 BC.

1240–850 BC
The Aeolian Islands were occupied by the Ausonians led by Liparus. Liparus was succeeded by Aeolus whose house, according to the Odyssey by Homer, gave hospitality to Odysseus.

600–300 BC
In 580 BC, Greeks exiled from Rhodes and Knidos landed at Lipari and began a period of Greek domination, which was known for acts of piracy against Etruscan and Phoenician shipping. There was production of vases and other ceramics.

300 BC–AD 250
The islanders were allies of the Carthaginians against Rome during the Punic Wars. Although the Battle of the Lipari Islands in 260 BC led to a Carthaginian victory, the Romans later sacked Lipari and their domination led to a period of poverty.

AD 250–1000
At the fall of the Roman Empire, the Aeolian Islands came under the sway of the Visigoths, the Vandals and the Ostrogoths, followed by the domination of the Byzantine Empire. In 264, a coffin which contained the body of Bartholomew was washed upon the beach of Lipari, with the result that Bartholomew was immediately elected the patron saint of the Aeolian Islands. Calogeras the hermit was active on Lipari during the first half of the 4th century and he gave his name to the thermal springs. In 836 the Arabs sacked Lipari, massacred the population, and enslaved the survivors.

1000–1500
The Normans liberated Sicily from the Arabs. Roger II of Sicily sent the Benedictine monks to Lipari, which gave rise to considerable development on the islands. A cathedral dedicated to Saint Bartholomew was built, as well as the Benedictine monastery in the castle. Lipari became a bishopric and agriculture made progress in Salina, as well as the smaller islands. In 1208 Frederick II of Swabia acceded to the throne of Sicily. The period of prosperity which followed, and which was consolidated during the course of his reign, ended with the domination of the Angevins and the rebellion of the Sicilians which culminated in the revolt of the Sicilian Vespers. The Aeolians however, remained loyal to Charles of Anjou, and commercial links were established with Naples, the capital of the Angevin kingdom. In 1337 Lipari opened its gates to the French fleet without resistance, and in return obtained various commercial and fiscal benefits. In the mid-15th century, Naples and Palermo united into the Kingdom of the Two Sicilies under the crown of Alfonso V of Aragon. Aeolian privileges were recognized. Aeolian privateers fought alongside the Spanish against the French.

1500–present
On June 30, 1544, a fleet of 180 Ottoman vessels under the command of the corsair Hayreddin Barbarossa occupied Lipari and laid siege to the castle. The defenders surrendered. 9,000 of the 10,000 citizens of Lipari were captured and enslaved. Many had already been killed while others were finished off while attempting to escape. A number of citizens were ransomed in Messina and returned to the islands. Only after the tragedy did the Spanish authorities turn their attention to Lipari and repopulate the city with Sicilian, Calabrian and Spanish families. The city walls and houses were rebuilt and an Aeolian fleet was constructed which was able to successfully defend the Tyrrhenian Sea from the Ottomans.

In 1693, an earthquake destroyed all the towns in eastern Sicily, causing around 60,000 deaths. After the population invoked the protection of Saint Bartholomew during prayers in the cathedral, there was not a single victim on the Aeolian Islands. The economic conditions of the islands improved greatly during the 17th century with agricultural progress (malvasia grapes, capers, and a variety of fruit, vegetables and fishing). With the Bourbons came the introduction criminal and political prisoners to the islands. In 1916, the penal colony was closed, but the Fascist regime tried to reopen it in 1926 unsuccessfully. The island population reacted by pulling down the remains of the ex-penitentiary in the castle. However, not long after, the castle was converted to accommodate anti-Fascist political prisoners in enforced exile. Liparians fraternized with these exiles until the Allies’ liberation. After the war, the same room that had housed the opponents of Fascism became the Aeolian Archaeological Museum.

Towards the end of the 19th century, the Aeolian Islands were visited by Archduke Ludwig Salvator of Austria—a friend of the islands and also a man with a profound knowledge of the archipelago. Between the years 1893–96 he published a work of eight volumes on the Aeolian Islands.

In August 1888, the crater named Fossa on Vulcano erupted and caused many deaths in the sulphur mines. The eruptions continued for 19 months.

On New Year’s Day in 1909, a rumor appeared in international newspapers that the Aeolian Islands had been “swallowed up by the sea” during a time of volcanic activity. While communication with the islands was interrupted for a time, they were not otherwise lost.

During World War II, all of the Aeolian Islands were under Allied control by August 1943.

Flora
The flora has a dominant vegetation, talk dell’Asteracea endemic Centaurea aeolica Gus, both in pure stands or in association with Sencio Bicolor, are also present long-standing individuals Genista Tyrrhena, Valsecchi and Spartium junceum (L.), Saccharum aegyptiacum Will. The typical crops of the islands have always been concerned conusciuti capers and exported since Roman times and for which there were special jars not waterproof, and wine, of which the most famous is always the dessert Malvasia, the pride and honor of the Aeolian Islands.


Fauna
Fauna has a shortage of vertebrate and invertebrate fauna, including birds are present Buzzard (Buteo buteo L.), a bird of prey easily identifiable, as well as its size, for broad wings and rounded tail, which feeds in general insects and small mammals. The Falco (Tinulucus L.) accustomed to human presence if they are often laid on rocks and looking erbusti curious visitors, including silvidi that inhabit the islands is not uncommon to come across nell’Occhiocotto (Sylvia melanocephala Gmelin) and Subalpine Warbler (Sylvia Cantillas Pallas), distinguishable from Dartford (Sylvia undata Boddaert) to the chest and throat pinkish brown color. This is also the only snake in the Aeolian Islands, the rat snake is not poisonous, and even if you can find it everywhere there is no danger. 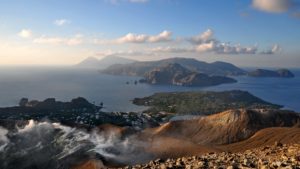 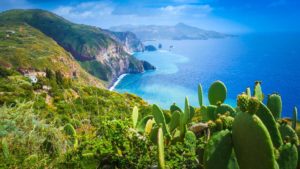 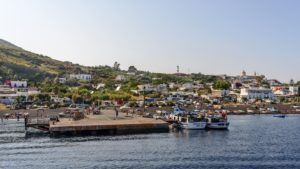 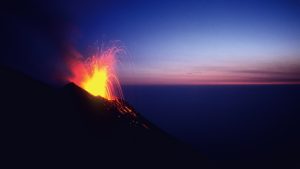 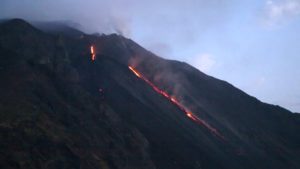 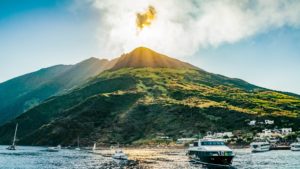 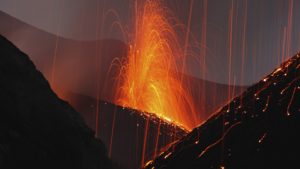 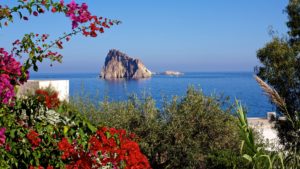 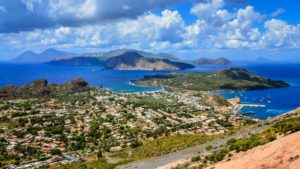 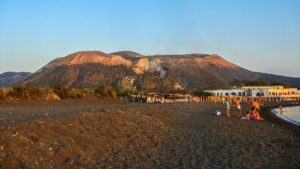 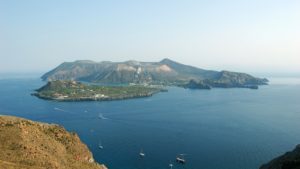 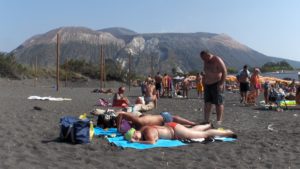 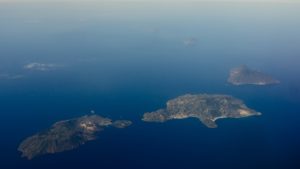 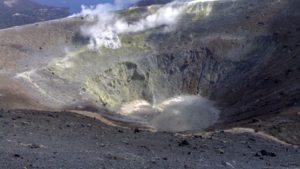 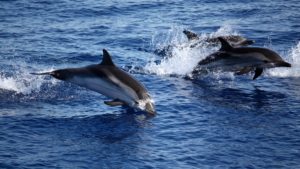 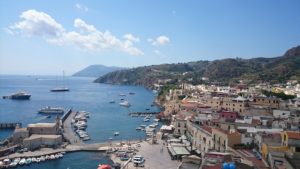 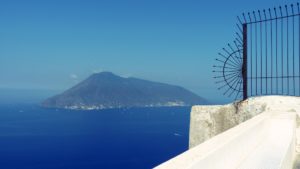