Small pastel-colored houses scattered like paintings in a gallery along a steep slope that connects to the port via a steep staircase in lava, here there are no cars or motorbikes but only the strength and the will of a people who for centuries along it helped by cute donkeys. Lonely, inhospitable, difficult, Alicudi is the wildest of the Aeolian Islands, a paradise that induces evasion, perfect for those who like to be in full contact with nature and want to get away from unhealthy dependence on technology, outside the traditional tourist routes, where the environment makes this place totally unspoiled corner of the wildest and most natural of the archipelago, where there are pubs, discos and bars but only the ingenuity of the people who never miss a chance to come together and enjoy the pleasure of being together. You are immersed in an atmosphere with an antique flavor, wrapped in a wild yet gentle nature with its winding, narrow valleys and a sea of incredible beauty that makes this island one of the most picturesque and quieter delleEolie, where the visitor is immersed in a way of life now remote. Who comes to Alicudi immersed in a way of life now lost elsewhere. The backwash of the sea and the rustling of the wind on vegetation are the only sounds. Given the particular conformation of the ground, missing altogether roads or paths carriage roads and, therefore, even cars, scooters and bicycles. To address the steps of lava, that climb everywhere, it relies on our feet and the friendly donkeys are bred on the island and bear the weight of baggage and cargo from the port to the scattered houses on a slope. The ancient name of Alicudi is Ericusa, the presence on the island of heather plant that still abounds on the slopes and in the inaccessible valleys of the volcanic cone off today. The base of the volcano extends from 1500 m. below the level of the sea to reach the 675 m. Mount Wire Harp. The island is the westernmost of the Aeolian Islands, the first that the boats from Palermo and Ustica meet. For this reason, even if harsh and isolated despite the total lack of bays and shelters moor, was a landmark for navigators of antiquity. Inhabited since prehistoric times, and in the Hellenistic age, retains some memory of the past in the remains of a settlement of the Early Bronze Age, sixteenth and seventeenth centuries BC, which extended close to the cliff Palumba. On the east coast of the island are scattered fragments of pottery from the Roman period, perhaps the remains of some shipwreck. Alicudi, like the other islands, has suffered centuries of raids by pirates and the little that the poor inhabitants ave-space is the same people sold as slaves. The terror of these “visits” led the inhabitants to flee and made Alicudi mostly abandoned throughout the Middle Ages until 1600. Restocking, back to 1600, has brought to the island a very small number of surnames so that because of ma-trimoni between relatives, it has become very difficult to distinguish the membership of each to its original group. Hence the use of so-called insults, nicknames which permit the identification of individual families in the multitude of “Taranto”, “Russian” and a few others of the family names of “cavaddi” (horses, to the height of one of the ancestors ), the “mustazzoni” (mustache of a great-grandfather), the “Iatti” (cats), the “friscaleddu” (the whistler) are some of the nicknames that put a note in the bright and colorful local talk. The population, which currently does not reach the 150 souls, was over 1200 inhabitants at the beginning of the century, before the great emigration to America and Australia. Intensely exploited the ground, even managing to export part of its production of oil and capers …. 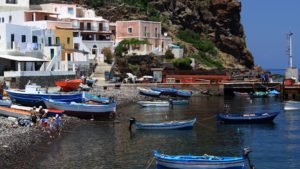 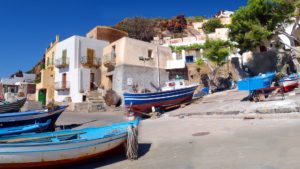 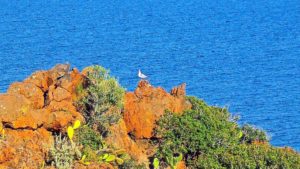 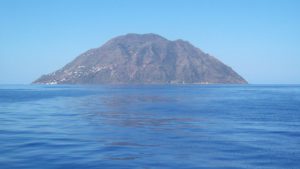 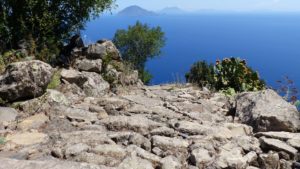 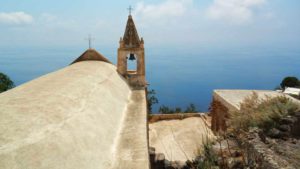